I’ve been puzzling over this tweet from Jeff Rouder: 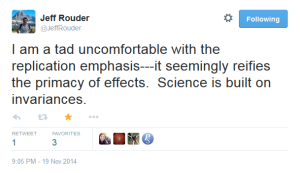 Surely, I thought, psychology is built out of effects. What could be wrong with focussing on testing which ones are reliable?

But I think I’ve got it now. The thing about effects is that they show you – an experimental psychologist – can construct a situation where some factor you are interested in is important, relative to all the other factors (which you have managed to hold constant).

To see why this might be a problem, consider this paper by Tsay (2013): “Sight over sound in the judgment of music performance”. This was a study which asked people to select the winners of a classical music competition from 6 second clips of them performing. Some participants got the audio, so they could only hear the performance; others got the video, so they could only see the performance; and some got both audio and video. Only those participants who watched the video, without sound, could select the actual competition winners at above chance level. This demonstrates a significant bias effect of sight in judgements of music performance.

To understand the limited importance of this effect, contrast with the overclaims made by the paper: “people actually depend primarily on visual information when making judgments about music performance” (in the abstract) and “[Musicians] relegate the sound of music to the role of noise” (the concluding line). Contrary to these claims the study doesn’t show that looks dominate sound in how we assess music. It isn’t the case that our musical taste is mostly determined by how musicians look.

The Tsay studies took the 3 finalists from classical music competitions – the best of the best of expert musicians – and used brief clips of their performances as stimuli. By my reckoning, this scenario removes almost all differences in quality of the musical performance. Evidence in support for this is that Tsay didn’t find any difference in performance between non-expert participants and professional musicians. This fact strongly suggests that she has designed a task in which it is impossible to bring any musical knowledge to bear. musical knowledge isn’t an important factor.

This is why it isn’t reasonable to conclude that people are making judgments about musical performance in general. The clips don’t let you judge relative musical quality, but – for these equally almost equally matched performances – they do let you reflect the same biases as the judges, biases which include an influence of appearance as well as sound. The bias matters, not least because it obviously affects who won, but proving it exists is completely separate from the matter of whether the overall judgements of music, is affected more by sight or sound.

Further, there’s every reason to think that the conclusion from the study of the bias effect gives the opposite conclusion to the study of overall importance. In these experiments sight dominates sound, because differences due to sound have been controlled out. In most situations where we decide our music preferences, sounds is obviously massively more important.

Many psychological effects are impressive tribute to the skill of experimenters in designing situations where most factors are held equal, allowing us to highlight the role of subtle psychological factors. But we shouldn’t let this blind us to the fact that the existence of an effect due to a psychological factor isn’t the same as showing how important this factor is relative to all others, nor is it the same as showing that our effect will hold when all these other factors start varying.

Link: Are classical music competitions judged on looks? – critique of Tsay (2013) written for The Conversation

Link: A good twitter thread on the related issue of effect size – and yah-boo to anyone who says you can’t have a substantive discussion on social media