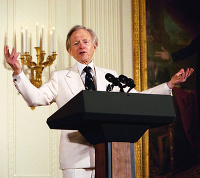 I’ve got a piece in today’s Observer looking back on 20 years since novelist Tom Wolfe wrote a landmark article that threw open the doors on how the new science of cognitive neuroscience was challenging the notion of the self.

Exactly 20 years ago, Tom Wolfe wrote one of the most influential articles in neuroscience. Titled Sorry, But Your Soul Just Died, the 1996 article explores how ideas from brain science were beginning to transform our understanding of human nature and extend the horizons of our scientific imagination. It was published in a mainstream magazine, written by an outsider, and seemed to throw open the doors to an exhilarating revolution in science and self-understanding. Looking at the state of neuroscience and society two decades later, Wolfe turned out to be an insightful but uneven prophet to the brain’s future.

Wolfe’s article has been cited widely by both neuroscientists and the popular press.

It’s not entirely clear whether it shaped our popular understanding of brain science or whether it just predicted a future trend but it’s notable that before 1996 most press articles on fMRI were focused on technical details but subsequently they tended to be much more about ‘the brain reason for’ some aspect of human thought or behaviour.

Either way, it was clearly an important moment for neuroscience and my piece in The Observer looks back on Wolfe’s take on our changing view of human nature with the benefit of 20 years of brain science behind us.

And just to say, I occasionally have a bit of a grumble about the headlines written for my articles but hats off to however came up with “Neuroscience and the premature death of the soul” for this piece.

Link to ‘Neuroscience and the premature death of the soul’ in The Observer
Link to Tom Wolfe’s epic ‘Sorry, But Your Soul Just Died’.

Quick links from the past week in mind and brain news:

Don’t tase me bro! Because it’ll cause short term cognitive impairment which may affect my ability to respond correctly under police interview. Important research from Drexel.

Mosaic has an interesting piece on hacking the placebo response and associative learning to improve medical treatments.

Your Next New Best Friend Might Be a Robot. Might be already for all I know. Nautilus on social robotics.

The Atlantic covers the bitter fight over the benefits of bilingualism.

Good sceptical Gary Marcus talk on the current state of artificial intelligence and a useful tonic to those who think deep learning will lead to strong AI.

The Economist has an excellent in-depth article on the social effects of legalising cannabis.

Science News reports that the rise of human civilization was tied to belief in punitive gods. And also reality TV, you’ll notice.

Last night I taught a two hour class called ‘Navigating Neuroscience’ for the Guardian Masterclass series and I had the interesting challenge of coming up with a two hour course on some key concepts to help people make better sense of brain science, how it’s discussed, and its changing place in society.

As part of that, I recommended some books to give interested non-specialists a good critical introduction. I added a book after hearing some of the questions and I’ve included the list below.

I’ve mentioned some of them before on Mind Hacks in their own right, but I thought they’re worth mentioning as a set.

The books have been chosen to complement each other and the idea is that if you read all four, you should have a solid grounding in modern cognitive neuroscience and beyond. In no particular order:

This is a great book for understanding common fallacies in conclusions drawn from cognitive neuroscience studies and what conclusions can reasonably be drawn from this evidence. It tackles several areas as examples of where these fallacies are having a significant effect: neuromarketing, neurolaw, lie detection, addiction and the brain-disease fallacy.

It’s a book of 50 small chapters each of which contains an essential idea on which the foundation of modern neuroscience rests. It’s very accessibly and accurately written and gets across some key subtleties that many academic textbooks miss. The great thing about this book is that it’s not just a ‘nuts and bolts’ guide to the brain and isn’t afraid to go into quite technical areas (‘Default Mode’, ‘Prediction Error’) while making sure they’re described in straight-forward language.

Great Myths of the Brain
by Christian Jarrett

This is especially good for listing and dispelling commonly cited but erroneous brain ‘facts’. It starts with some historical ones (‘Drilling a Hole in the Head Releases Evil Spirits’), move on to more obvious contemporary myths (‘We Only Use Ten Percent of Our Brains’) but then includes a range of common myths that may be well understood by neuroscientists but which pervade popular discourse and the media (‘Mirror Neurons Make Us Human’, ‘The Brain Receives Information from Five Senses’).

Neuro: The New Brain Sciences and the Management of the Mind
by Nikolas Rose and Joelle M. Abi-Rached

This is a great book for understanding how neuroscience is understood and used in society. It’s actually an academic book and Rose and Abi-Rached are sociologists but it’s technically accurate without being densely written. I genuinely think it’s one of the most important neuroscience books of the last decade. It is a brilliant analysis of how brain science and the practice of brain science have become associated with changing ideas of what it means to be human and their reciprocal relationship between politics and social influence in the world.