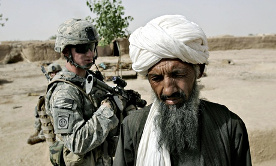 I’ve got an article in The Observer about how behavioural science is being put at the centre of military operations and how an ‘influence-led’ view of warfare is causing a rethink in how armed conflict is managed.

Techniques such as deception and propaganda have been the mainstay of warfare for thousands of years, but there is a growing belief that the modern world has changed so fundamentally that war itself needs to be refigured. Confrontations between standing armies of large nation states are becoming rare while conflicts with guerrilla or terrorist groups, barely distinguishable from the local population, are increasingly common. In other words, overwhelming firepower no longer guarantees victory…

Mackay and Tatham argue that researching what motivates people within specific groups and deploying informed, testable interventions on the ground will be central to managing modern conflict.

It also discusses how ‘information operations’ thinking has spread into the military’s work in the civilian realm.

Link to ‘How to win wars by influencing people’s behaviour’.