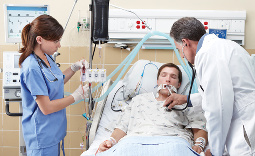 I’ve got an article in The Observer about the psychological impact of being a patient in intensive care that can include trauma, fear and intense hallucinations.

This has only been recently recognised as an issue and with mental disorders being detected in over half of post-ICU patients it has sparked a serious re-think of how ICU should be organised to minimise stress.

Some of the most spectacular experiences are intense hallucinations and delusions that can lead to intrusive and surreal flashbacks that can have effects long after the person has become medically stable.

Wade interviewed patients about the hallucinations and delusions they experienced while in intensive care. One patient reported seeing puffins jumping out of the curtains firing blood from guns, another began to believe that the nurses were being paid to kill patients and zombify them. The descriptions seem faintly amusing at a distance, but both were terrifying at the time and led to distressing intrusive memories long after the patients had realised their experiences were illusory.

Many patients don’t mention these experiences while in hospital, either through fear of sounding mad, or through an inability to speak – often because of medical breathing aids, or because of fears generated by the delusions themselves. After all, who would you talk to in a zombie factory?

One of the interesting aspects is how standard ICU care is incredibly stressful and uncomfortable experience. I quote Hugh Montgomery, a professor of intensive care medicine, who says “If you think about the sort of things used for torture you will experience most of them in intensive care”!

Anyway, more at the link below.

Link to ‘When intensive care is just too intense’ in The Observer.

9 thoughts on “The hallucinated demons of intensive care”