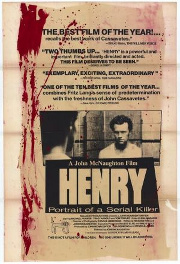 The most accurately depicted psychopaths in cinema have been identified by a study that has just been published in the Journal of Forensic Sciences.

The study specifically excluded films that weren’t intended to be realistic (involving magical powers, fantasy settings and so on) but still examined 126 characters from 20th and 21st century movies.

It’s worth noting that the clinical definition of psychopathy is not what most people think – it’s not necessarily someone who is a knife wielding maniac – but suggests someone who has poor empathy, little remorse, and is impulsive and manipulative.

Needless to say, psychopathy is more common in people who are persistently violent, but you don’t need to be violent to be a psychopath.

After conducting the analysis the authors note which films they feel have most accurately captured the characteristics of the psychopath.

Among the most interesting recent and most realistic idiopathic psychopathic characters is Anton Chigurh in the 2007 Coen brothers’ film, No Country for Old Men. Anton Chigurh is a well-designed prototypical idiopathic / primary psychopath. We lack information concerning his childhood, but there are sufficient arguments and detailed information about his behavior in the film to obtain a diagnosis of active, primary, idiopathic psychopathy, incapacity for love, absence of shame or remorse, lack of psychological insight, inability to learn from past experience, cold-blooded attitude, ruthlessness, total determination, and lack of empathy. He seems to be affectively invulnerable and resistant to any form of emotion or humanity. Having read and studied [serial killer] Richard Kuklinski’s case, Chigurh and Kuklinski have several traits in common. In the case of Chigurh, the description is extreme, but we could realistically almost talk about “an anti-human personality disorder”.

Another realistic interesting example is Henry (inspired from [real life serial killer] Henry Lee Lucas) (Henry-Portrait of a Serial Killer, 1991). In this film, the main, interesting theme is the chaos and instability in the life of the psychopath, Henry’s lack of insight, a powerful lack of empathy, emotional poverty, and a well-illustrated failure to plan ahead. George Harvey is another different and interesting character found in The Lovely Bones, 2009. Harvey is more ‘adapted’ than Chigurh and Henry. He has a house, is socially competent and seems like ‘the average man on the street’. Through the film, we learn that he is in fact an organized paraphilic SVP [sexually violent predator]. Here, the false self is well illustrated.

In terms of a ‘successful psychopath’, Gordon Gekko from Wall Street (1987) is probably one of the most interesting, manipulative, psychopathic fictional characters to date. Manipulative psychopathic characters are increasingly appearing in films and series. Again, we observe the same process, as observed and explained before, with antisocial psychopaths. For the past few years, with the world economic crises and some high-profile trials (such as the Bernard Madoff trial), the attention of the clinicians is more focused on ‘successful psychopaths’, also called corporate psychopaths by Babiak et al. Films and series presenting characters such as brokers, dishonest traders, vicious lawyers, and those engaged in corporate espionage are emerging (e.g., Mad Men, The Wire) and are generally related to the global economy and international business. Again, we see a strong parallelism between what happens in our society and what happens in film.

The paper also has a short section on the how the movies portray psychopathatic mental health professionals, which were apparently more common in cinema from the 1980s.

It describes how psychiatrist Hannibal Lecter is an ‘extraordinarily astute clinician’ who can diagnose Agent Starling’s psychological conflicts by identifying her perfume and assessing her shoes and clothing, while also being invulnerable.

They authors dryly note that these seem to be abilities “that are not generally found in everyday clinical practice”.

Link to locked study in Journal of Forensic Sciences.

10 thoughts on “The most accurate psychopaths in cinema”