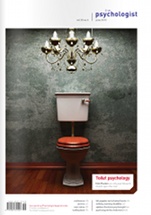 The latest issue of The Psychologist has hit the shelves and it has a freely available and suprisingly thought-provoking article about bathroom psychology.

If you’re thinking it’s an excuse for cheap jokes you’d be mistaken as takes a genuine and inquisitive look at why so little psychology, Freud excepted, has been concerned with one of our most important bodily functions.

This part, on the history of theories regarding graffiti found in toilets, is as curious is it is bizarre.

Toilet graffiti, dubbed ‘latrinalia’ by one scholar, has drawn attention from many researchers and theorists over the years. Many of them have focused on gender, using public lavatories as laboratories for studying sex differences in the content and form of these scribblings. Alfred Kinsey was one of the first researchers to enter the field, surveying the walls of more than 300 public toilets in the early 1950s and finding more erotic content in men’s and more romantic content in women’s. Later research has found that men’s graffiti also tend to be more scatological, insulting, prejudiced, and image-based, and less likely to offer advice or otherwise respond to previous remarks.

Theorists have struggled to explain differences such as these. True to his time, Kinsey ascribed them to women’s supposedly greater regard for social conventions and lesser sexual responsiveness. Psychoanalytic writers proposed that graffiti writing was a form of ‘phallic expression’ or that men pursued it out of an unconscious envy of women’s capacity for childbirth. Semioticians argued that men’s toilet graffiti signify and express political dominance, whereas women’s respond to their subordination. Social identity theorists proposed that gender differences in latrinalia reflect the salience of gender in segregated public bathrooms: rather than merely revealing their real, underlying differences, women and men polarise their behaviour in these gender-marked settings so as to exaggerate their femaleness or maleness.

The article looks at many other curious episodes in the bashful psychology of the bathroom.

Link to The Psychologit on ‘toilet psychology’

5 thoughts on “The bathroom of the mind”