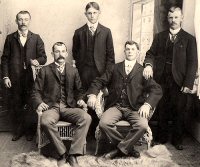 Harvard Business Review interviews a research team who have found that increasing the number of women in a team raises group intelligence.

Of course, the findings could also be as accurately described as showing that men make groups more stupid, although the researchers are far too tactful to mention this particular interpretation.

Woolley: We’ve replicated the findings twice now. Many of the factors you might think would be predictive of group performance were not. Things like group satisfaction, group cohesion, group motivation—none were correlated with collective intelligence. And, of course, individual intelligence wasn’t highly correlated, either.

Malone: Before we did the research, we were afraid that collective intelligence would be just the average of all the individual IQs in a group. So we were surprised but intrigued to find that group intelligence had relatively little to do with individual intelligence.

HBR: But gender does play a role?

Malone: It’s a preliminary finding—and not a conventional one. The standard argument is that diversity is good and you should have both men and women in a group. But so far, the data show, the more women, the better.

As a male clinical psychologist, I am now completely accustomed to being intellectually out-gunned by my female colleagues, but it’s important to realise that there’s more to group work than intelligence.

Do we really want a world of better decisions but with fewer dick jokes? Just the thought of it keeps me up at night.

Link to article in Harvard Business Review (and don’t miss the podcast).

27 thoughts on “A dose of female intelligence”