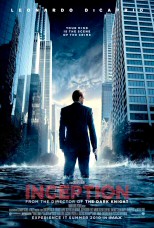 When you have a hammer, everything can look like a nail and people have been banging the shit out of Inception. The sci-fi movie of the year has attracted numerous ‘neuroscience of Inception’ reviews despite the fact that the film has little to say about the brain and is clearly more inspired by the psychological theories of Carl Jung than by neurobiology.

It’s easy to why the movie has attracted neuroscience fans, including a brain-based review in this week’s Nature. It’s a science fiction film, the dream entry device presumably alters the brain, and director Christopher Nolan’s previous film Memento was carefully drawn from a detailed reading of the science of brain injury and memory loss.

Inception itself, however, contains so little direct reference to the brain (I counted about three lines) that you have to do some pretty flexible interpretation to draw firm parallels with brain science. Perhaps, most tellingly, for a film supposedly about neuroscience, the dream entry devices don’t even connect to the brain and nothing is made of how they achieve their interface.

But for those familiar with the theories of Carl Jung, the psychoanalyst and dissenter from Freud’s circle, the film is rich with both implicit and explicit references to his work.

As with all psychoanalysts, Jung was concerned with the subconscious mind and believed that it contains powerful emotional processes that, when malformed or disturbed, can break through and cause immense distress to our conscious lives. To protect us, the subconscious tries to hide these forces behind symbols, which appear, most vividly, in dreams.

This is why Freud called dreams “the royal road to the unconscious” and Jung’s work is also based on this core assumption.

Similarly, in Inception, dreams are a way of accessing the subconscious of the dreamer, to the point where they can be used to steal secrets. This dream invasion work is not easy, of course, primarily because the subconscious mind attempts to defend against invaders (a defense mechanism in psychoanalytic terms) and the dreamspace needs to be explored and interpreted by the invaders to get to the secret itself.

This is not the only challenge, as other people in the dream are projections of the dreamer’s subconscious where, in line with the definition from psychoanalysis, personal feelings are perceived as residing in other people.

In the film, the young architect, Ariadne is hired to build dreams in the form of mazes, and the labyrinth forms one of the central symbols in the film (the name, Ariadne, by the way, comes from the Greek legend where she leads Theseus out of the Minotaur’s labyrinth – Jung referred to being lost in life as ‘losing the Ariadne thread’).

In Jungian psychology the labyrinth is one of the most powerful symbols of the subconscious. In his book ‘Man and His Symbols’, he explains its meaning:

“The maze of strange passages, chambers, and unlocked exits in the cellar recalls the old Egyptian representation of the underworld, which is a well-known symbol of the unconscious with its abilities. It also shows how one is “open” to other influences in one’s unconscious shadow side and how uncanny and alien elements can break in.”

Ariadne is hired because Don Cobb can no longer create dreams, owing to the fact that the subconscious representation of his ex-wife, who killed herself due to Cobb’s dream work, appears and attempts to violently stop him. Cobb names her his ‘shade’, directly referencing the Jungian concept of the shadow where we are haunted by the parts of ourselves which we are most ashamed and which we most try to repress.

While Cobb’s main objective is to get back to his children, his main challenge is to overcome his shadow that causes conflicts in his subconscious. Normally, if you wrote a sentence like that about a film you would be using a Jungian interpretation, but in the case of Inception this is also the literal state of affairs.

This is not the only psychological journey that happens in the film, as Cobb’s journey is paralleled by that of Robert Fischer, the target of the dream invaders. Fischer’s father is dying leaving both the state of the family corporation and the father-son relationship unresolved.

The situation is a representation of the Arthurian grail legend, the Fisher King. In the tale, the king responsible for protecting the Holy Grail is wounded and his kingdom decays in parallel to his damaged body. The knight Perceval learns he could heal the king and his kingdom by asking the right questions.

Not coincidentally, Jung was intensely interested in the Grail legend throughout his life as he thought it was one of the best representation of the ‘collective unconscious‘ where common psychological themes of humanity appear as what he called ‘archetypes‘.

His wife, Emma Jung, a psychoanalyst in her own right, wrote a book on the psychological meaning of the legend drawn from Carl Jung’s theories and cited the key theme of the tale to be ‘individuation‘, that is the healthy development of ourselves as distinct individuals by resolving our relationships with those around us and the conflicts within us.

In Inception, Robert Fischer’s journey ends with him resolving his relationship with his wounded father and saving his ‘kingdom’ by learning that he had always wanted him to be his own man and not try and be his father – which, as we learn at the end – is at the core of his subconscious. Again, this is not an interpretation; it is the literal truth of the film.

There are lots of other subtle pointers in the film which may or may not be deliberate. Is it a co-incidence that the lead character Don Cobb, shares a name with Stanley Cobb, the person most responsible for introducing Jungian analysis to the United States? Or that Ariadne gets the job by drawing a mandala style maze, a symbol that Jung believed was a representation of the unconscious self? Or that Mal’s madness is portrayed as her subconscious breaking through into reality, in line with Jung’s definition?

Regardless of whether these are subtle hints or not, the film is Jungian at its core, and what is most interesting for me is that Nolan is deploying different theories of the mind as themes in his films. While Memento was obviously neuropsychological, Inception is clearly Jungian.

Link to Wikipedia Inception page.
Link to more on Jung and Inception.

24 thoughts on “The labyrinth of Inception”