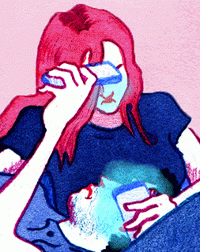 Nautilus has a piece by David Perezcassar on how technology takes advantage of our animal instinct for variable reward schedules (Unreliable rewards trap us into addictive cell phone use, but they can also get us out).

It’s a great illustrated read about the scientific history of the ideas behind ‘persuasive technology’, and ends with a plea that perhaps we can hijack our weakness for variable reward schedules for better ends:

What is we set up a variable reward system to reward ourselves for the time spent away fro our phones & physically connecting with others? Even time spend meditating or reading without technological distractions is a heroic endeavor worthy of a prize

Which isn’t a bad idea, but the pattern of the reward schedule is only one factor in what makes an activity habit forming. The timing of a reward is more important than the reliability – it’s easier to train in habits with immediate than delayed rewards. The timing is so crucial that in the animal learning literature even a delay of 2 seconds between a lever press and the delivery of a food pellet impairs learning in rats. In experiments we did with humans a delay of 150ms we enough to hinder our participants connecting their own actions with a training signal.

So the dilemma for persuasive technology, and anyone who wants to free themselves from its hold, is not just how phones/emails/social media structure our rewards, but also the fact that they allow gratification at almost any moment. There are always new notifications, new news, and so phones let us have zero delay for the reward of checking our phones. If you want to focus on other things, like being a successful parent, friend or human the delays on the rewards of these are far larger (not to mention more nebulous).

The way I like to think about it is the conflict between the impatient, narrow, smaller self – the self that likes sweets and gossip and all things immediate gratification – and the wider, wiser self – the self than invests in the future and carers about the bigger picture. That self can win out, does win out as we make our stumbling journey into adulthood, but my hunch is we’re going to need a different framework from the one of reinforcement learning to do it

Nautilus article: Unreliable rewards trap us into addictive cell phone use, but they can also get us out

Mindhacks.com: post about reinforcement schedules, and how they might be used to break technology compulsion (from 2006 – just sayin’)

George Ainslie’s book Breakdown of Will is what happens if you go so deep into the reinforcement learning paradigm you explode its reductionism and reinvent the notion of the self. Mind-alteringly good.