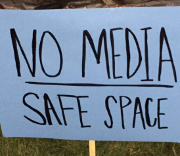 There’s much debate in the media about a culture of demanding ‘safe spaces’ at university campuses in the US, a culture which has been accused of restricting free speech by defining contrary opinions as harmful.

The history of safe spaces is an interesting one and a recent article in Fusion cited the concept as originating in the feminist and gay liberation movements of the 1960s.

But the concept of the ‘safe space’ didn’t start with these movements, it started in a much more unlikely place – corporate America – largely thanks to the work of psychologist Kurt Lewin.

Like so many great psychologists of the early 20th Century, Lewin was a Jewish academic who left Europe after the rise of Nazism and moved to the United States.

Although originally a behaviourist, he became deeply involved in social psychology at the level of small group interactions and eventually became director of the Center for Group Dynamics at MIT.

Lewin’s work was massively influential and lots of our everyday phrases come from his ideas. The fact we talk about ‘social dynamics’ at all, is due to him, and the fact we give ‘feedback’ to our colleagues is because Lewin took the term from engineering and applied it to social situations.

In the late 1940s, Lewin was asked to help develop leadership training for corporate bosses and out of this work came the foundation of the National Training Laboratories and the invention of sensitivity training which was a form of group discussion where members could give honest feedback to each other to allow people to become aware of their unhelpful assumptions, implicit biases, and behaviours that were holding them back as effective leaders.

Lewin drew on ideas from group psychotherapy that had been around for years but formalised them into a specific and brief focused group activity.

One of the ideas behind sensitivity training, was that honesty and change would only occur if people could be frank and challenge others in an environment of psychological safety. In other words, without judgement.

Practically, this means that there is an explicit rule that everyone agrees to at the start of the group. A ‘safe space’ is created, confidential and free of judgement but precisely to allow people to mention concerns without fear of being condemned for them, on the understanding that they’re hoping to change.

It could be anything related to being an effective leader, but if we’re thinking about race, participants might discuss how, even though they try to be non-racist, they tend to feel fearful when they see a group of black youths, or that they often think white people are stuck up, and other group members, perhaps those affected by these fears, could give alternative angles.

The use of sensitivity groups began to gain currency in corporate America and the idea was taken up by psychologists such as the humanistic therapist Carl Rogers who, by the 1960s, developed the idea into encounter groups which were more aimed at self-actualisation and social change, in line with the spirit of the times, but based on the same ‘safe space’ environment. As you can imagine, they were popular in California.

It’s worth saying that although the ideal was non-judgement, the reality could be a fairly rocky emotional experience, as described by a famous 1971 study on ‘encounter group casualties’.

From here, the idea of safe space was taken up by feminist and gay liberation groups, but with a slightly different slant, in that sexist or homophobic behaviour was banned by mutual agreement but individuals could be pulled up if it occurred, with the understanding that people would make an honest attempt to recognise it and change.

And finally we get to the recent campus movements, where the safe space has become a public political act. Rather than individuals opting in, it is championed or imposed (depending on which side you take) as something that should define acceptable public behaviour.

In other words, creating a safe space is considered to be a social responsibility and you can opt out, but only by leaving.

8 thoughts on “The real history of the ‘safe space’”