A new film, Ex Machina, is released in the UK tomorrow and it is quite possibly one of the best sci-fi films of recent times and probably the best film about consciousness and artificial intelligence ever made. 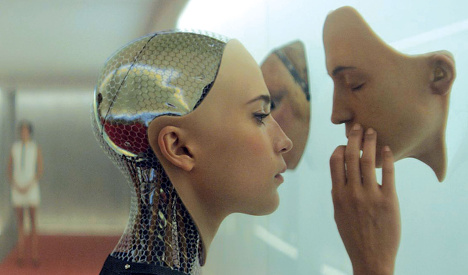 The film is near-future but in the tradition of sci-fi as a theatre in which to test ideas, it focuses on the stark and unexpected issues raised by self-conscious robots designed for the human market.

Writer and debut director Alex Garland clearly put a lot of effort into getting the scientific concepts right, enlisting biologist Adam Rutherford and cognitive roboticist Murray Shanahan to finesse the philosophy of mind.

It’s also sparked some great reviews of the movie and the cognitive science behind it. The Independent has an excellent piece on the science behind the plot and there’s a great interview with the scientific advisors in Dazed.

But probably the best so far is consciousness researcher Anil Seth’s extended review in New Scientist which tackles the core of the film’s philosophical kick:

While the Turing test has provided a trope for many AI-inspired movies… Ex Machina takes things much further. In a sparkling exchange between Caleb and Nathan, Garland nails the weakness of Turing’s version of the test, a focus on the disembodied exchange of messages, and proposes something far more interesting. “The challenge is to show you that she’s a robot. And see if you still feel she has consciousness,” Nathan says to Caleb.

This shifts the goalposts in a vital way. What matters is not whether Ava is a machine. It is not even whether Ava, even though a machine, can be conscious. What matters is whether Ava makes a conscious person feel that Ava is conscious. The brilliance of Ex Machina is that it reveals the Turing test for what it really is: a test of the human, not of the machine. And Garland is not necessarily on our side.

In fact, the film constantly flips viewers between thinking of Ava as a machine, and as a conscious being, and forces us to continually check the shifting plot reality to see if it still holds together.

At the end of the film you come to realise that it’s not Ava who’s being tested, it’s you.