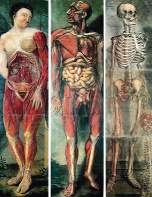 New Statesman has a fascinating article on the ‘cultural history of pain’ that tracks how our ideas about pain and suffering have radically changed through the years.

One of the most interesting, and worrying, themes is how there have been lots of cultural beliefs about whether certain groups are more or less sensitive to pain.

Needless to say, these beliefs tended to justify existing prejudices rather than stem from any sound evidence.

Some speculated whether the availability of anaesthetics and analgesics had an effect on people’s ability (as well as willingness) to cope with acute affliction. Writing in the 1930s, the distinguished pain surgeon René Leriche argued fervently that Europeans had become more sensitive to pain. Unlike earlier in the century, he claimed, modern patients “would not have allowed us to cut even a centimetre . . . without administering an anaesthetic”. This was not due to any decline of moral fibre, Leriche added: rather, it was a sign of a “nervous system differently developed, and more sensitive”.

Other physicians and scientists of the 19th and early 20th centuries wanted to complicate the picture by making a distinction between pain perception and pain reaction. But this distinction was used to denigrate “outsider” groups even further. Their alleged insensitivity to pain was proof of their humble status – yet when they did exhibit pain reactions, their sensitivity was called “exaggerated” or “hysterical” and therefore seen as more evidence of their inferiority.

One thought on “A cultural view of agony”