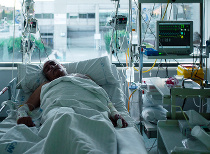 Intensive Care Medicine has published a wonderfully written and vivid account from a teenager who spent time brain injured and hallucinating in an intensive care unit.

The writer describes how he was admitted to intensive care at the age of 15 after suffering a head injury and had intense and bizarre hallucinations which are, as we know now, surprisingly common in critical care patients.

My experience of the time under sedation can be split into two. There was what I could perceive of the real world around me, and then there was my dream world.

In the real world, the most constant feature was sound. I could hear the nurses talking, understanding everything they said. They always spoke their names. They were always kind, conscious I think that I might hear them. They helped me to relax. I could hear the noises of the ward, tones of voices and alarms. The alarms made me tense. I can remember Mum talking to me a lot and Dad reading me ‘The Hobbit’, although I still can’t remember the names of all the dwarves. Mum and Dad’s voices always came from the left.

My other senses were not wholly switched off either. Things were put in my mouth: tubes, sucky things, wet watery pads and a toothbrush. Someone moved my hair about. I felt furry and silky toys placed under my fingers. My brother and sisters had brought a knitted tortoise and a horse for me. My feet were moved about and stretched, which felt really good. I remember that the rolled-up bed sheets were uncomfortable.

Other sensations were less good. The constant, repetitive shining of a bright light in my remaining eye really annoyed me – I am sure I can remember every single time.

Then there was my dreaming. I lived in the dream world nearly all the time and it went on and on. The dreams were vivid, terrifying and very disturbing. There were some good ones but unfortunately for me a lot of really bad ones. I can still remember most of them even now, more than a year since.

At the sound of an alarm, a giant monster appeared with a meat cleaver and pursued me around the sports hall. I had to protect a girl and prevent an army from crossing a river. The whole river and hall were aflame. I was burning from the heat.

In another I had to stop an alarm-driven colossal centipede from crossing a bridge. I could see the shadow of monsters looming towards me behind a curtain. I knew the monsters were there and about to consume me, but I lay transfixed, unable to move, and I remember feeling myself sweating with excruciating fear. I was then on the bridge of a nuclear submarine with maniacs trying to blow up the world, there was a huge explosion. Then it ended.

I was aboard a flying craft. I was there to stop green-coated aliens from creating human missiles. The aliens were forcing people into missile tubes. They were going to drop the human bombs from the aircraft.

Then there was a shape-shifter leopard beast chasing me and my friends. We were working in a fast-food place on a ship. It cornered us, and the Kentucky Fried Chicken sign burst into red lightning.

But I knew when something really nasty was going to happen. I could always hear the same alarm going off. It was a signal for the monsters to appear, for the centipede to attack, for bombs to be dropped, I would be sacrificed…I was very afraid. Tension would build to some hideous climax. Looking back, I suspect the pressure in my brain was causing both the nightmares and the alarm to go off.

I have made a great recovery from my injuries due in large part to the excellent care that was taken of my brain in intensive care. I have been into see the team a few times but I never stay too long. Those alarms still make me feel nervous!

As I noted in a recent article, these sorts of hallucinations were thought to be a distressing but ultimately irrelevant part of recovery but more recent studies suggests that have longer-term psychological impact that can be problematic in its own right.