The New York Times has an obituary for child neurologist Peter Huttenlocher, who surprised everyone by finding that the human brain loses connections as part of growing into adulthood.

Huttenlocher counted synapses – the connections between neurons – and as a paediatric neurologist was particularly interested in how the number of synapses changed as we grow from children to adults.

Before Huttenlocher’s work we tended to think that our brain’s just got more connected as we got older, but what he showed was that we hit peak connectivity in the first year of life and much of brain development is actually removing the unneeded connections.

This is know as synpatic pruning and it was demonstrated with this graph from classic 1990 paper. 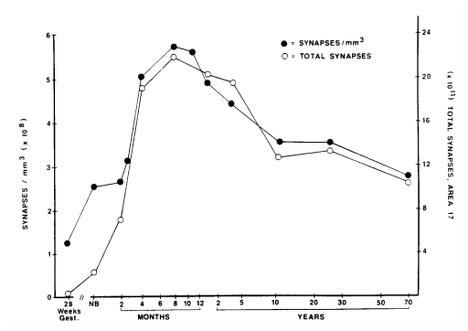 I love this graph for a couple of reasons. Firstly, it’s a bit wonky. It was hand-drawn and whenever it is reproduced, as it has been in many textbooks, it’s always a bit off-centre.

Secondly, it’s crystal clear. It’s a graph showing the density of synaptic connections in the visual cortex of the human brain and you can see it’s rapidly downhill from the first year of life until the late teens where things start to even out.

This is a good thing as the infant brain starts over-connected but loses anything that isn’t needed as we learn which skills are most important, and we are left with only the most efficient neural connections, through the experience of growing up.

One of Huttenlocher’s discoveries was that this process of synaptic pruning may go wrong in people who have neurodevelopmental disorders.

10 thoughts on “Peter Huttenlocher has left the building”