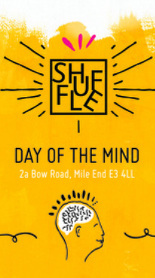 A festival of music, film and neuroscience is about to kick off in an abandoned psychiatric hospital in East London. Called Shuffle Festival, it runs from the 8th – 18th August.

It is happening in the old St Clement’s Hospital on Mile End Road and is being curated by Oscar winning film director Danny Boyle.

If you check the programme, August 11th is the ‘Day of the Mind’ where during the day you can enter for free and experience a host of neuroscience events, stalls and experiments.

Later in the evening there is an event with Ruby Wax, following by an extract of Luke Fowler’s R.D Laing documentary All Divided Selves.

After I’ll be taking part in a discussion about the legacy of R.D. Laing, neuroscience and mental health and later in the evening there’s the inevitable showing of One Flew Over the Cuckoo’s Nest.

The story of how I got involved in the event is a little curious. One Saturday, I decide to walk from Kingsley Hall, the location of R.D. Laing chaotic 60s experiment in mental health care, to Liverpool Street Station, the location of the original ‘Bedlam’ hospitals.

As I was passing St Clement’s Hospital I noticed some folks on the inside, shouted until I get their attention and asked if they could let me in. It turns out it was the organiser and friends scoping the place out.

I got to take some great photos, gave them my email address and despite starting the day by yelling excitedly at them, they’ve asked me to speak.

By the way, I’ve had a morbid interest in charting how some of London’s biggest Victoria asylums have been converted into luxury apartments but after the festival St Clement’s is going to be turned into affordable housing for East London which makes a nice change.

If you’re interested in the Shuffle Festival, a lot of the events are selling out quickly so grab tickets while you can.