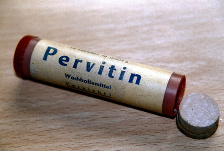 Spiegel Online has an excellent article that traces the history of methamphetamine from its early days as synthetic soldier fuel in Nazi Germany to its recent history as street crank.

There is one curious bit though:

Pervitin remained easy to obtain even after the war, on the black market or as a prescription drug from pharmacies. Doctors didn’t hesitate to prescribe it to patients as an appetite suppressant or to improve the mood of those struggling with depression. Students, especially medical students, turned to the stimulant to help them cram through the night and finish their studies faster.

Numerous athletes found Pervitin decreased their sensitivity to pain, while simultaneously increasing performance and endurance. In 1968, boxer Joseph “Jupp” Elze, 28, failed to wake again after a knockout in the ring following some 150 blows to the head. Without methamphetamine, he would have collapsed much sooner and might not have died. Elze became Germany’s first known victim of doping. Yet the drug remained on the market.

This was probably not mainly due to increased pain tolerance. In fact, studies on the pain-killing effects of amphetamine show quite modest effects on reducing discomfort.

Being knocked out is basically where the brain has sustained so much damage that it cannot maintain sufficient arousal to support consciousness.

There is also a chronic effect of amphetamine raising blood pressure, which increases the chance of stroke, so getting repeatedly punched in the head while on speed is probably not a good idea. I suspect this was the more likely route to the death of boxer Joseph “Jupp” Elze.

If you want a background on the science and history of stimulants, I never miss the opportunity to recommend the brilliant book Speed, Ecstasy, Ritalin: The Science of Amphetamines.

However, if you want a quick primer (no, not that sort) the Spiegel article is a great place to start.

Link to Spiegel article ‘The German Granddaddy of Crystal Meth’.

One thought on “Crystal history”