A new artform has emerged – the post-mortem neuroportrait. Its finest subject, Phineas Gage.

Gage was a worker extending the tracks of the great railways until he suffered the most spectacular injury. As he was setting a gunpowder charge in a rock with a large tamping iron, the powder was lit by an accidental spark. The iron was launched through his skull.

He became famous in neuroscience because he lived – rare for the time – and had psychological changes as a result of his neurological damage.

His story has been better told elsewhere but the interest has not died – studies on Gage’s injury have continued to the present day.

There is a scientific veneer, of course, but it’s clear that the fascination with the freak Phineas has its own morbid undercurrents.

The image is key.

The first such picture was constructed with nothing more than pen and ink. Gage’s doctor John Harlow sketched his skull which Harlow had acquired after the patient’s death.

This Gage is forever fleshless, the iron stuck mid-flight, the shattered skull frozen as it fragments.

Harlow’s sketch is the original and the originator. The first impression of Gage’s immortal soul.

Gage rested as this rough sketch for over 100 years but he would rise again.

In 1994, a team led by neuroscientist Hannah Damasio used measurements of Gage’s skull to trace the path of the tamping iron and reconstruct its probable effect on the brain.

It made Gage a superstar but it sealed his fate.

Every outing needed a more freaky Phineas. Like a low-rent-celebrity, every new exposure demanded something more shocking. 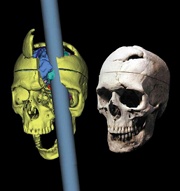 A 2004 study by Peter Ratiu and Ion-Florin Talos depicted Gage alongside his actual cranium – his digital skull screaming as a perfect blue iron pushed through his brain and shattered his face – the disfigurement now a gory new twist to the portrait.

In contrast, his human remains are peaceful – unmoved by the horrors inflicted on their virtual twin.

But the most recent Gage is the most otherworldly. A study by John Darrell Van Horn and colleagues examined how the path of the tamping iron would have affected the strands of white matter – the “brain’s wiring” – that connects cortical areas.

A slack-jawed Gage is now pierced by a ghostly iron bar that passes almost silently though his skull.

Gage himself is equally supernatural.

His white matter tracts appear within his cranium but are digitally dyed and seem to resemble multi-coloured hair standing on end like the electrified mop of a fairground ghoul.

But as the immortal Gage has become more horrifying over time, living portraits of the railwayman have been discovered. They show an entirely different side to the shattered skull celebrity. 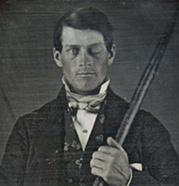 To date, two portraits have been identified. They both show a ruggedly handsome, well-dressed man.

He has gentle flesh. Rather than staring into blackness, he looks at us.

Like a 19th century auto-whaler holding his self-harpoon, he grips the tamping iron, proud and defiant.

I prefer this living Phineas.

He does not become more alien with every new image.

He is at peace with a brutal, chaotic world.

He knows what he has lived through.

Fuck the freak flag, he says.

5 thoughts on “The postmortem portraits of Phineas Gage”