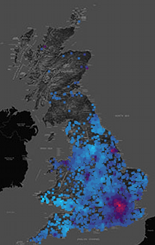 The amount genes and the environment contribute to our behaviour varies across the country and a new study has mapped exactly where the differences lie.

As well as an interesting finding in itself, the study also highlights an important but often misunderstood point about heritability.

The map on the right is from the study, and generated by the freely available software the research team have created. It shows the results of a large twin study that has been carried out with the help of families across the country.

Twin studies allow us to work out the amount of influence the environment and genetics has on particular trait by comparing the outcomes in identical twins, who are as close as you’ll get to being genetically identical, and non-identical twins, who share only 50% of their genes.

In other words, it’s daft to give a definitive answer about ‘how genetic’ ADHD is, because the expression of genetic tendencies depends on the environment.

That’s not to say that ADHD or any other mental disorder are completely flexible with regard to their environmental and genetics bases, as there are limits and these are likely to be specific to the problem.

But it is also the case that with complex outcomes like mental illness it’s impossible to say that a particular one is solely a ‘genetic disorder’.

There’s a good write-up of the study on the King’s College London website and both the scientific paper and the software are freely available.

The software lets you map the genetic and environmental contributions to a wide number of outcomes that were measured by the study – everything from height to school performance to ADHD.

Link to write-up of study.

2 thoughts on “Gene environment interaction of your neighbourhood”