We’ve mentioned some amazing advances in brain scanning unborn babies before on Mind Hacks and this image is another step in that remarkable science.

The coloured fibres in the image are still-developing white matter circuits in the brain of an unborn baby at 36 weeks, picked out by a diffusion MRI scan.

The scan is from a paper just published in Topics in Magnetic Resonance Imaging. 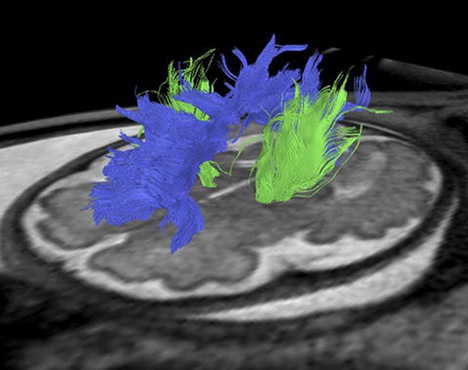 Diffusion-tensor imaging or DTI can identify white matter connections, the brain’s ‘cabling’, by picking out which water molecules in the brain only move along restricted paths.

It’s a bit like having a tube in a beehive. Even if you had no idea where the tube was, you could work out its location if you had information on the bee’s movements, because bees inside the tube can only move in one direction.

The same principal applies and DWI looks for the white matter ‘tubes’ by looking for where the brain’s water molecules can only move in certain directions.

This relies on the brain being relatively still so these scans are difficult to do in unborn babies because of their tendency to move around in the womb.

Nevertheless, when they work, the results are spectacular, and we can see the unborn brain flowering into a neurally connected marvel.