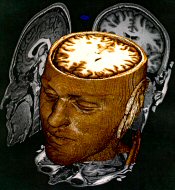 Functional magnetic resonance imaging, better known as fMRI, is 20 years old this week. October’s NeuroPod marks the celebrations by looking back at the brain scanning technology, it’s successes, and its troublesome teenage years.

The imaging technique was first announced in a 1991 study published in Science that announced how a standard MRI scanner could be used to used to track where oxygenated and deoxygenated blood flowed in the brain.

The technique takes advantage of the fact that haemoglobin, the iron containing protein that carries oxygen to essential tissues in the body, is differently magnetic when it is carrying oxygen, in comparison to when it is oxygen depleted.

The scanner is essentially a large electromagnet that aligns the proton spin of hydrogen atoms in the body, plus a radio frequency pulse that knocks them out of alignment.

fMRI tunes in to the different magnetic echoes, or more technically, the magnetic resonance, of the protons realigning in oxygenated and deoxygenated blood.

Although the technique can pinpoint where these changes take place in the brain, down to about the nearest millimetre, blood flow is not the same as actual brain activity, so it is not a precise measure.

Furthermore, changes can only be tracked in time slices of a second or more, clearly missing some of the changes in the fast moving brain, and statistical choices during analysis can affect the outcome sometimes as much as the task itself.

But despite the disadvantages, and with data from other types of study and imaging techniques, fMRI has become an essential scientific tool in the quest to understand the link between the mind and brain.

The piece has interviews with neuroscientists Karl Friston and Russ Poldrack, both involved in fMRI since its early days, who talk about the genuine progress and unfortunate hype that surrounds the technique.

A fantastic look back of the first two decades of fMRI and the other sections of the NeuroPod podcast are equally as interesting.

4 thoughts on “Twenty years of fMRI”