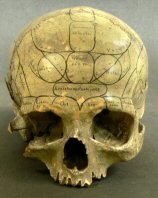 The Loom has a wonderful photo essay taken from a new book called ‘Portraits of the Mind: Visualizing the Brain from Antiquity to the 21st Century’.

The photos range from the first ever known drawing of the nervous system, made by 11th century Arab scientist Ibn al-Haytham, to the beautiful pictures of the ‘brainbow‘ fluorescent neurons.

Don’t miss the caption below each picture that describes its origin and significance. The photo on the right is genuine human skull with phrenology markings.

Link to Loom photo essay.
Link to details of the book ‘Portraits of the Mind’.