The New York Times has a fantastic interview with Emery Neal Brown, a neuroscientist and doctor who is trying to understand how anaesthesia works to better understand the brain and to build better drugs.

It’s a great interview because he address several of the common beliefs and myths about anaesthesia as well as the challenge of doing neuroscience on comatose people.

A. It’s a reversible drug-induced coma, to simplify. As with a coma that’s the result of a brain injury, the patient is unconscious, insensitive to pain, cannot move or remember. However, with anesthesia, once the drugs wear off, the coma wears off.

Q. Some years ago when I had an operation, I remember the anesthesiologist trying to soothe me by saying that she was going to put me “to sleep.” Was this right?

A. No. And I wish we’d refrain from saying that to patients. It’s inaccurate. It would be better if we explained exactly what the state of general anesthesia is and why it’s needed. Patients appreciate this intellectual honesty. Moreover, anesthesiologists should never say “put you to sleep” because it is exactly the expression used when speaking about euthanizing an animal! 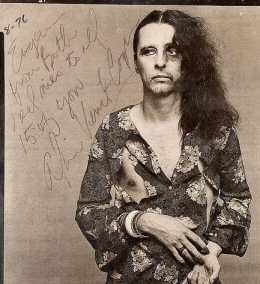 While browsing through Flickr I just found this amazing signed photo that rocker Alice Cooper dedicated to his psychologist Eugene Landy.

If you click on the image for the full version you can see the photo in all its Cooper-esque glory. It’s dated 1976, which is apparently shortly before Cooper was hospitalised to treat his alcohol problems.

Even with an enlarged image the writing remains quite hard to read but according to this autograph auction page the text reads:

A b&w 8″ x 10″ photo inscribed “Eugene from Both of Me to all 15 of You” and signed “Alice Vincent Cooper” in black ink by the original shock rocker. the date “8-76” is printed above the inscription. “Eugene” refers to psychologist Eugene Landy, with whom Cooper was a patient in the 1970s. (Lundy also treated Brian Wilson of the Beach Boys.)

To say Lundy ‘treated’ Brian Wilson is a bit like saying Napolean ‘toured’ Europe as he eventually lost his license after it was found out that he had taken over Wilson’s business affairs while supposedly working with him as a responsible clinician.

The situation lasted several years and has become a notorious episode in Wilson’s life. 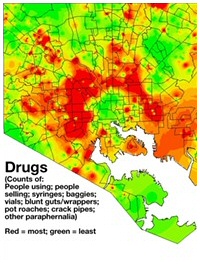 Urbanite has a fascinating article on researchers who are attempting to map drug users’ minds onto the city streets.

They are giving addicts GPS-enabled PDAs that ask the participants to rate their psychological state as they move around Baltimore.

By using pre-existing maps of the city that chart things like neighbourhood poverty and local drug availability it’s possible to see how the mental state of users changes as they move through the different physical and social environments of the city.

To make the patterns of movement meaningful, the researchers have to understand the various city “environments” that the drug users move through. This job fell to Craig, the biostatistician and a Baltimore native. To create maps of the urban landscape, Craig started with Census indices, which include race, income, and other socioeconomic metrics. To those he added a system developed by Dr. Debra Furr-Holden at the Johns Hopkins School of Public Health, who sent teams out to score city blocks based on physical characteristics (broken windows, shell casings, street memorials for recent killings) and on people’s behavior (clearly intoxicated adults, unsupervised children, and so on). “Her data are like nothing else I’ve ever seen,” says Epstein.

On these maps, Craig plots the paths of drug users as they move through the city, weaving in the information they’ve plugged into their PDAs. The result is a detailed rendering of how addiction is lived in space and time, opening a new window on the experience of tens of thousands of city residents. “Their work is novel,” says Yale University’s Rajita Sinha, professor of psychiatry and child study and director of the Yale Stress Center. This research “allows us to understand the social context in which drug use takes place and to evaluate that context,” says Sinha, who is internationally known for her pioneering research on the mechanisms linking stress to addiction.

The technique is called ‘ecological momentary assessment’ – although it is similar to a closely related method called ‘experience sampling’ that also involves giving participants an electronic device that requires they record their mental state at various points in their daily life.

These techniques have been around since the early 90s but the new aspect is the incorporation of GPS to map these responses into physical space.

One of the pioneers of this technique has been, not a scientist, but the artist Christian Nold, who has been making emotion maps of cities for many years to beautiful effect.

The Urbanite article covers how a team from the US National Institute on Drug Abuse are attempting perhaps the most ambitious and data-rich version of this approach to date which truly attempts to blend both inner and outer worlds.

Link to article ‘On the Trail of Addiction’.

BBC Radio 4’s Case Notes has an excellent edition on epilepsy that covers everything from the changes in consciousness during seizures to the use of brain surgery to treat the condition.

It’s a pretty straightforward discussion but you’ll likely not find a better introduction to the neurological disorder, what it does and how it’s treated. Just well explained, no nonsense and comprehensive.

Jay Traver had begun to notice an uncomfortable crawling sensation under her skin. Scalp spots had bothered her for years but despite her best efforts – she was, after all, a renowned professor of zoology – she couldn’t identify the parasites.

Over the seasons the bugs had spread across her body and eventually invaded her eyes, ears and nostrils, raising her discomfort to fever pitch. Doctors seemed mystified but by the summer of 1950 she had made a breakthrough.

Strong caustic soaps seemed to help control the infestation and she had dug some of the bugs out of her skin with her nails to identify them as dermatophagoides – a mite never previously known to infect humans.

Although lacking a cure she wrote of her discovery and experiences as an article for the scientific journal Proceedings of the Entomological Society of Washington which later appeared in their February 1951 issue.

It is perhaps one of the most remarkable scientific papers ever published, not, as it turns out, because of the startling new discovery, but because the Professor had never been infected by parasites.

The bugs were hallucinated, the infestation a delusion and Travers was suffering from a mental illness.

Known as delusional parasitosis the condition consists of the usually focused delusion that the person is infected by parasites that crawl under the skin and which remain present in the surrounding environment.

Patients often turn up to doctors with small bugs in plastic bags which later turn out to be dust, irrelevant bugs or even just flakes of human skin.

Extensive damage is common as patients apply stronger and stronger solutions to the skin or use sharps objects to dig out what they assume are parasites below the surface of their body.

Professor Traver’s article reports these experiences in detail and even has photos of the supposed ‘dermatophagoides’ mites – which were identified by others as common house dust mites that only live on dry skin that has flaked off the body.

Tellingly, the article described how, after an admission to hospital where no parasites were found, Traver was referred to a neurologist for what was apparently labelled a “psychoneurotic condition”. Dismissing the diagnosis she quickly ducked the appointment.

The scientific paper has become a little-known classic for students of obscure psychiatric conditions. In a recent article on the condition, entomologist Nancy Hinkle hailed it as “one of the most astounding first-person accounts of Ekbom’s syndrome” available but the paper has a more profound point.

Hinkle notes that “her experience illustrates that even highly educated scientists accustomed to dealing with facts and evidence are not immune to delusions”.

We like to think that our convictions are based on reasoned conclusions and that all of our beliefs are subject to the searchlights of self-inquiry, but we are only experts as far as we are allowed by our own minds.

Like a Wizard of Oz that never got found out, we cannot see the man behind the curtains and even knowing he is there doesn’t let us detect him at work.

Professor Jay Traver lived with her delusions for 31 years, right up until her death.